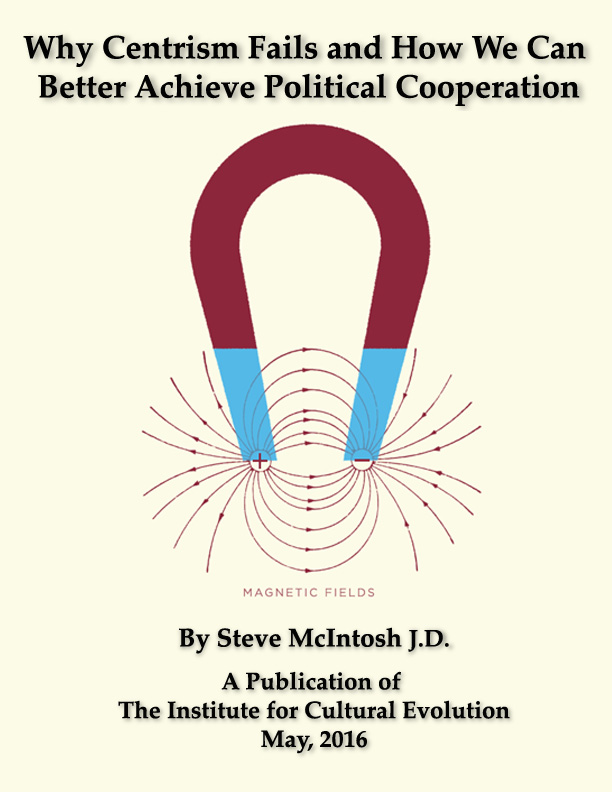 Why Centrism Fails and How We Can Better Achieve Political Cooperation

In this 12 page article, “Why Centrism Fails and How We Can Better Achieve Political Cooperation,” ICE president Steve McIntosh argues for a higher form of ‘integral centrism.’ Unlike mainstream centrism, integral political centrism provides a cultural container that can integrate and harmonize the full spectrum of positive American values. Moreover, integral centrism advances the new political practice of ‘values integration,’ which can help overcome hyper-partisan polarization by increasing the scope of what people are able to value.

Contemporary centrism has lost persuasive power because its underpinning ideology of patriotism—compromising for the good of the country—has been eroded by the rise of progressive postmodernism as a political force. While moderate centrism has always relied more on pragmatic reason than ideological passion, the old mainstream center is now being increasingly pulled apart on both sides by strongly ideological competing moral systems.

However, as McIntosh explains, as the progressive postmodern worldview gains political ground (evidenced by the strength of Bernie Sander’s candidacy), this actually points to the potential for the rise of a ‘post-postmodern’ political perspective that can provide the higher form of centrism America now needs.

Steve McIntosh offers a clear and excellent understanding of the current political and ideological quandaries from an evolutionary, integrative perspective and, in my view, his proposals for creatively reconciling polarized ideological camps make sense. I also think that the integrative approach is the coming solution to the excess of polarization endangering society and governing, that is, unless dominant holon-like social factions escaping checks and balances, unless unacknowledged shadows lingering between social developmental levels constituting various types of hidden, unchecked power groups behind the scenes prove so formidable as to subvert the normal cultural evolutionary process.

We must allow faith-based, traditionalist findings to be recognized by modern and post modern ideologues and vice versa. In fact, there already exist values in common but the heroic defense of each other’s valid truths or positions blinds in a cognitively disconnecting manner.

Upon overcoming the unnoticed hubris within incipient integrality, unable to see how it has also blocked away important truths from previous stages, I must say that the “Values Integration” path deftly proposed by Steve McIntosh (primarily based upon Ken Wilber’s Integral Theory) is not a form of mediocre centrism sometimes understood as a lackluster Middle Ground often indistinctly catering to power and corruption or even to democratic principles as required. Rather, it is more like Aristotle’s dynamic and virtuous Golden Mean which can constitute a synergistic, dynamic integration of the best society-building values from different ideological factions accompanied by the negation of the mutual negation of each other’s positive values along with their negative ones as practiced today in a dogmatic fashion by polarized ideological social factions.

In fact, for quite some time, I had also been thinking along the same lines but find McIntosh’s exposition quite clear and to the point. Seriously recognizing the positive contributions of all cultural ideological factions and associated developmental levels (even previous and beyond the named traditionalist, modernist and postmodernist stages) will also be a “test of integrality.” I say this because there still linger important issues that are not well-considered within the integral movement which tends to be too closely aligned with acceptable issues found in cultural evolutionary stages close to the post postmodern. Thus denials and or suppression or the submersion as subject of what could have been recognized as object a long time ago in important pre-modern traditionalist religious and pre-traditionalist religious stages have also been incorporated in the incipient integral stages of development. But this needs to change in order to provide a truly inclusive integral stage. Divine intervention and the otherworldly are both genuine and necessary issues for a comprehensive Meta Theory that reunites subjectivity and objectivity in the collective and individual across body, minds and spirit.

Besides income inequality, another shadow that lingers on from pre-integral stages is the formation of a kind of de facto oligarchy also hijacking and distorting the normal modern political process to a significant degree, a situation in which many of the largest corporations, the financial sector and some of most powerful families have gained an excessive ascendancy over The People as a multivariate analysis conducted by political scientists Gilens and Page demonstrated.

Besides this, there’s the denial and the potential effects of recognizing what truly seems to be the existence of an assorted multi-realm-utilizing, non-human, intelligent presence associated to the truly mysterious aspects of the UFO phenomenon, something which has been either purposefully denied or suppressed due to modern social taboo and/or denied/misunderstood/vilified by some pre-modern, religious fundamentalists. Accepting and/or disclosing this semi-covert presence interacting with thousands (or perhaps millions) of individuals worldwide will – naturally – be interpreted according to the various pre-integral developmental perspectives in positive and negative terms. Furthermore, secret, highly compartmentalized and officially non-existent research on this issue may be related to power groups partially or almost completely outside the purview of normal politics and constitutional checks and balances conforming what Historian Richard Dolan proposes as a “break-away civilization.”

Finally, the potential for major enhancements in understanding about the nature of reality in connection to non-human, intelligence is applicable to religions, history, the social sciences, philosophy, law and the hard sciences is significant and not only possibly disruptive but also likely (and perhaps necessary) to stimulate a faster transition into a truly Integral or integrative, “post postmodern” phase.

Sorry, but centerism failed because it really was just good old fashioned corruption. Let EVERYBODY tag on their costly amendments in order to get “compromise”. And the public didn’t even really understand it was happening. A simple bill to say increase immigration court justices could have billions in added on spending (including adding illegal immigrants to the welfare rolls through grant programs) just through the amendment process. There literally was not a single special interest who didn’t rate above the lowly American taxpaying household. This isn’t “centerism”, but flat out greed and corruption.

This excellent paper demonstrates the fresh emergence of integral politics in a compelling and practical form.

I’m looking forward to what comes next.

With this latest effort, Steve McIntosh is proposing a way forward to break the stalemate that the West finds itself in these days. “Values Integration” proposes finding the common ground across pre-modern (traditional), modern, and post-modern values, and applying these common values to solve our stickiest problems. This would involve taking “the best” of these values and characteristics from each worldview, while leaving “the disasters” behind, and craft new approaches and solutions to problems we face today. I think it is a project worthy of our consideration and funding. I hope ICE is successful in moving forward in this effort. I wish them great success in moving forward.

Your blog keeps getting better and better! Your older articles are not as good as newer ones you have a lot more creativity and originality now keep it up!

This site uses Akismet to reduce spam. Learn how your comment data is processed.

Copyright © 2021 The Institute for Cultural Evolution | Website provided by AMSTEC