The Institute for Cultural Evolution’s “Post-Progressive Project” takes a major step with the introduction of The Post-Progressive Post website. Here is the media release for the website’s launch:

BOULDER, COLORADO, June 28, 2021: The torn social fabric of American culture is threatening our democracy. Yet no one seems capable of brokering a truce in the culture war. In response to this daunting challenge, a new publication offers a fresh solution: a post-progressive political perspective. This is the focus of “The Post-Progressive Post,” the latest offering from the Institute for Cultural Evolution think tank, a nonprofit organization originally founded in 2013.

Using a newspaper format, The Post-Progressive Post website features numerous articles, opinion pieces, “win-win-win” issue positions, illustrated overviews of its perspective, short videos, and podcasts. The new publication also includes entertaining political quizzes. In connection with the launch of the website the Institute for Cultural Evolution is also founding a membership association, dubbed the Post-Progressive Alliance, which it describes as “a new home for the politically homeless.”

Backed by a high-powered Board of Directors, including Whole Foods CEO John Mackey and several prominent tech CEOs, The Post-Progressive Post is exploring what they call “political higher ground.” The Post is spearheaded by political philosopher Steve McIntosh and nonprofit executive Josh Leonard, who say they want to “help America grow into a better version of itself.”

According to McIntosh, “Political centrism is no longer viable because there’s very little common ground left. To repair our broken politics, we need to increase our collective cultural intelligence.” Managing editor Leonard added “the post-progressive perspective is not anti-progressive, it transcends progressivism’s downsides, while carrying forward its important upsides.”

The Post-Progressive Post’s homepage on Day 1: 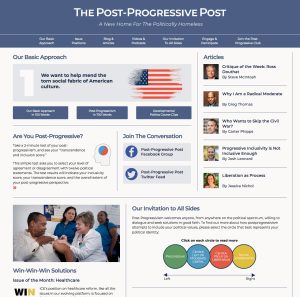 A general description of the overall Post-Progressive Project: 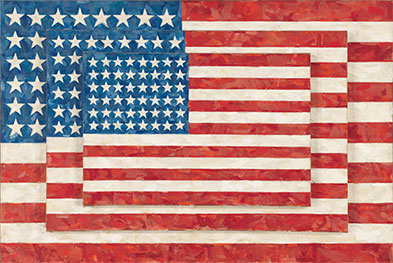 1. Grow and deepen the public profile and reputation of the post-progressive political perspective—put this way of thinking on the map.

2. Develop and promote an influential political constituency among people who identify as post-progressive—build a movement.

3. Foster political and cultural evolution on every front of its development—improve American democracy.

Higher Purposes to Be Served

“To advance the evolution of consciousness and culture in America.”

“To build a post-progressive political movement and promote the use of cultural intelligence across the political spectrum.”
The Project’s mission is to express and represent a new kind of higher ground—an enlarged political identity that demonstrates a compelling way forward for America’s cultural evolution.

Theory of Change and Strategy

The Post-Progressive Project’s theory of change is that culture and consciousness coevolve when people expand the scope of what they are able to value. The Project seeks to evolve American politics by helping each political faction better appreciate the intrinsic values of their opponents, as well as the underlying interdependence of America’s overall cultural ecosystem. According to this theory of change, a new era of kindness and cooperation can be brought about by promoting and popularizing the practice of cultural intelligence. Post-progressivism works to advance cultural evolution in three basic ways:

These three interrelated political strategies for fostering cultural evolution are discussed in greater detail in Steve McIntosh’s recent book: Developmental Politics—How America Can Grow into a Better Version of Itself (Paragon House 2020).

“Worldviews” are coherent sets of values and ideals that persists across multiple generations. Worldviews are large-scale, intersubjective cultural agreements about what is good, true, and beautiful. These value frames give meaning to reality and help provide personal identity. Worldviews are arguably the basic units of cultural analysis and interpretation—the most fundamental structures of cultural evolution.

“Post-progressivism” is an emerging cultural and political perspective that honors and synthesizes the best aspects of America’s three major worldviews: modernism, traditionalism, and progressivism. Through the use “cultural intelligence” (defined below), post-progressivism seeks to transcend progressivism’s pathologies, while carrying forward its important gifts. By eschewing the horizontal continuum of left and right, post-progressivism is charting a vertical dimension of normative growth that can lead to a more evolved form of politics and culture.

“Cultural intelligence” is the ability to recognize the mutual interdependence of America’s three major worldviews: traditionalism, modernism, and progressivism. This comprehensive overview perspective sees how the positive values and enduring accomplishments of all three of these distinct value frames form a kind of symbiotic cultural ecosystem wherein each worldview has an ongoing role to play. Cultural intelligence provides the ability to integrate and harmonize these three distinct sets of values. This process begins by clearly distinguishing between the positives and negatives of each worldview.

Progressivism’s positive values include social justice, worldcentric morality, and environmental priority. Whereas its negatives include “anti-modernism,” which fails to recognize how progressive culture itself is predicated on the freedom and prosperity provided by modernity’s liberal values; “reverse patriotism,” which characterizes American history as a sinister criminal enterprise; divisive identity politics, which promotes grievance without gratitude; and tyrannical demands for immediate and uncompromising reform, which disrespect the institution of democracy itself.

Modernism’s positive values include economic and scientific progress, individual liberty, and the rule of law. Whereas modernity’s negatives are seen in its environmental degradation, growing inequality, and nuclear proliferation.

Traditionalism’s positive values include loyalty to family and country, duty and honor, and the sacrifice of self-interest for the greater good. Whereas traditionalism’s negatives are found in its racism, sexism, and homophobia.

Once each worldview’s positives have been clearly distinguished from its abiding negatives—once the dignities have been separated from the disasters—it then becomes possible to integrate positive values from across the political spectrum. Yet crucially, this integration process does not eliminate the political challenges that each worldview poses to the others. Cultural intelligence seeks a kind of dynamic integration that preserves the natural polar tensions that exist between these worldviews. This political approach helps make these ongoing conflicts more functional and constructive by fostering deliberative relationships of challenge and support wherein each worldview can influence and improve its cultural competitors.

The development of human history entails both the social growth of human artifacts, institutions and technologies, as well as the cultural growth of human knowledge, values and ideals. This development is simultaneously physical and objective, psychological and subjective, and collective and intersubjective—the ongoing coevolution of “It, I, and We.” Sociocultural evolution overall counts as real evolution because it extends the structure of evolutionary emergence that began with the big bang, continuing the process through which “something more keeps coming from something less.”

The concept of “cultural evolution” primarily concerns the collective and intersubjective side of this development, with a special emphasis on values. Values are defined and sustained within large scale systems of agreement known as worldviews (defined above), which circumscribe horizons of potential improvement. New worldviews emerge through a dialectical process by pushing off against the shortcomings and pathologies of previous worldviews. Newly appearing worldviews are therefore inevitably defined by their opposition to the limitations of the previously prevailing culture. Yet simultaneously and conversely, new worldviews achieve developmental progress by building on what has come before.

Cultural evolution exhibits many varied characteristics. Viewed from certain perspectives, this growth appears not as a sequential trajectory of step-wise advance, but rather as a “sprawling bush” of development that includes numerous branches, contradictory countercurrents, as well as forces of decay that work against positive development or pervert it into trends that result in social regression. But notwithstanding the chaotic and contingent nature of cultural evolution, the historical record clearly shows how both the worldviews of modernism and progressivism have emerged in opposition to what came before. So even though the developmental trajectory of human culture is not linear and can’t be neatly pigeon-holed into a series of static stages, the dialectical process through which new worldviews emerge does mark the course of history with a structural sequence of emergence that unfolds in clearly identifiable steps. And these discrete steps of worldview emergence can be accurately identified as levels of development, albeit in a very loose and general way. This dialectical sequence of worldview emergence accordingly demonstrates the developmental logic of cultural evolution.

A Poetic Expression of Post-Progressive Aspirations

The heartfelt aims of the post-progressive project are expressed in the following “plea” to our fellow Americans:

We honor the enduring values of all three American cultures—traditional, modern, and progressive
While we acknowledge that each of these cultures includes pathologies we must overcome

Our society is growing

Article: Towards a Post-Progressive Political Perspective

Book: Developmental Politics—How America Can Grow into a Better Version of Itself