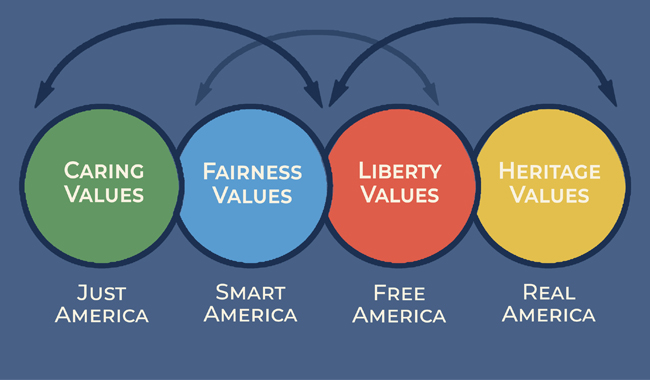 In this column I offer constructive critiques of public figures I admire by pointing out how they could benefit from a developmental perspective.

The Atlantic Magazine recently published a powerful and timely article by journalist George Packer. Entitled “How America Fractured Into Four Parts,” the article is adapted from Packer’s just-released book, Last Best Hope—America in Crisis and Renewal. Packer reaches many of the same conclusions about the current state of American culture that the Institute for Cultural Evolution has been describing for the last five years. So let me say up front that I am closely aligned with Packer’s thinking and hope his analysis is widely influential. Even though this column is called “Critique of the Week,” my constructive critiques of Packer’s article are made within a context of general agreement and admiration.

In his article, Packer outlines what he calls “four rival narratives … four accounts of America’s moral identity.” He labels these four distinct expressions of contemporary American culture: “Free America” (center-right and libertarians), “Smart America” (center-left meritocratic elites), “Real America” (Donald Trump’s base), and “Just America” (woke progressives). Although he briefly summarizes the positive aspects of each culture at the end, the majority of the article is devoted to stinging criticism of all of them. But this is what makes Packer’s article an important contribution to our national dialogue. While most journalists today cannot resist the partisan urge to draw horns on one side and a halo on the other, Packer is an equal opportunity critic.

He starts by lambasting center right “Free America” for turning “the goal of limited and efficient government into the destruction of government. … Rather than finding new policies to rebuild declining communities, Republican leaders mobilized anger and despair while offering up scapegoats. The party thought it could control these dark energies on its quest for more power, but instead they would consume it.” Packer blames Free America for turning its back on declining communities and paving the way for the destruction of the old Republican party through the emergence of Trumpism.

Packer then turns to elite center left “Smart America,” which he similarly assails for its careless disregard for the interests of ordinary Americans. He cites “meritocracy’s cruelty,” and the casual manner in which the educated class has abandoned national patriotism, identifying more with other global elites than with their own countrymen. Although an elite member of Smart America himself, Packer clearly understands why patriotism is necessary for ongoing political progress, writing: “patriotic feeling has to be tapped if you want to achieve anything big. If your goal is to slow climate change, or reverse inequality, or stop racism, or rebuild democracy, you will need the national solidarity that comes from patriotism.”

Next, Packer’s critique of right-wing “Real America” focuses on the pathologies of its chosen leaders. He starts by berating Sarah Palin’s “white identity politics,” lamenting how she served as “John the Baptist to the coming of Trump.” He then assails Trump’s evident character flaws: “Throughout his adult life, Trump has been hostile to Black people, contemptuous of women, vicious about immigrants from poor countries, and cruel toward the weak. He’s an equal-opportunity bigot. … Trump’s people still talked about freedom, but they meant blood and soil. Their nationalism was like the ethno-nationalisms on the rise in Europe and around the world.”

Finally, Packer turns to far left “Just America,” and he goes right for the jugular: “Just America has a dissonant sound, for in its narrative, justice and America never rhyme. A more accurate name would be Unjust America, in a spirit of attack rather than aspiration.” He scathingly accuses the progressive narrative of characterizing “America as a unitary malignant force beyond any other evil on Earth.”

Like most successful journalists, Packer is an entertaining writer and a master of critique. And although all of his critiques have been previously made elsewhere, by criticizing all four Americas at the same time, he shows how each narrative is contributing in its own way to the torn social fabric of our culture. I accordingly view Packer as an important ally in the project of transcending the hyperpolarization that is threatening American democracy.

My primary criticism is that he fails to offer a plausible solution. At the end of the article he does suggest the vague and rather unobjectionable idea that the path forward entails an attempt to create “Equal Americans, all with the same rights and opportunities.” But this is basically a platitude. Admittedly, one can only cover so much in a magazine article, but Packer’s book offers little more by way of a remedy.

Like beauty in contemporary art, optimism in mainstream contemporary journalism has become unfashionable. Yet despite his dark tone throughout, Packer’s excellent cultural intuition seems to sense that the way forward lies in carrying forward the best while pruning away the worst of these four American narratives. Although he writes in the key of pessimism, he tries to conclude on a note of optimism, writing that each of the four Americas “respond to real problems. Each offers a value that the others need and lacks ones that the others have. Free America celebrates the energy of the unencumbered individual. Smart America respects intelligence and welcomes change. Real America commits itself to a place and has a sense of limits. Just America demands a confrontation with what the others want to avoid.”

Yet despite this final positive trope, the view from where Packer sits as a prominent member of Smart America is inevitably bleak. Because it is squarely situated within the culture of mainstream modernity, Smart America is ill-equipped to adequately respond to either the challenge of progressive postmodernism, or the resulting right-wing backlash that has arisen in response to progressivism’s cultural ascendency. As Einstein famously observed, some problems can’t be solved using the same thinking that created them.

Nevertheless, it seems that Packer is poised to break through to a higher level of cultural understanding. If he came to recognize how our national solidarity has been disrupted by cultural growth, he would see how the solution to our democracy’s dilemma can be found through further cultural growth. In other words, if Packer were to adopt a developmental perspective and thereby appreciate how each of the four Americas has emerged within a vertical dimension of cultural evolution, he could strengthen his message by including a more credibly optimistic prescription for America’s hyperpolarization.

A developmental perspective provides the key to overcoming hyperpolarization because it reveals how each of America’s four major cultures is founded on a coherent set of positive bedrock values that are ultimately interdependent. If Packer embraced this kind of evolutionary view, he could begin to see how the way forward lies in crafting an inclusive cultural synthesis that can effectively distinguish each narrative’s disasters from its abiding dignities. The contours of such a “post-progressive synthesis,” as well as the strategies necessary to develop in this direction, are outlined in a wide variety of ways on this website, as well as in my 2020 book, Developmental Politics—How America Can Grow Into a Better Version of Itself.

Notwithstanding his current lack of a developmental perspective, Packer’s keen insight into the maladies of American culture is nevertheless welcome and important. As a next step, however, I think he would do well to move from a primarily pessimistic description of our present, to a more optimistic prescription for our future.