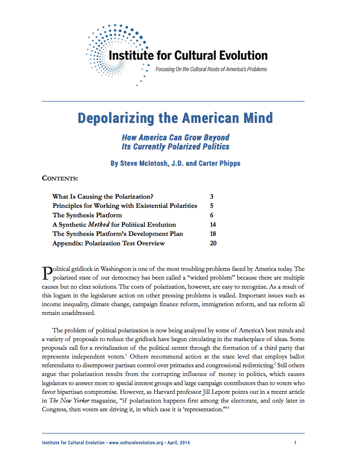 Depolarizing the American Mind, (at left) written in 2014 by Steve McIntosh and Carter Phipps, proposes a “synthesis platform” designed to address the current political stalemate and create new avenues of agreement and consensus across the different demographics of the American political spectrum. Depolarizing the American Mind also examines the causes of cultural and political polarization and describes evolutionary principles for working with “existential oppositions” such as “liberal and conservative.”

Also, on the right is a 6 page abridged version of the longer paper, Depolarizing the American Mind. This abridged version sketches the historical causes of political polarization and foresees the emergence of a “Future Right” and “Future Left” that have the potential to transform the current state of political dysfunction. 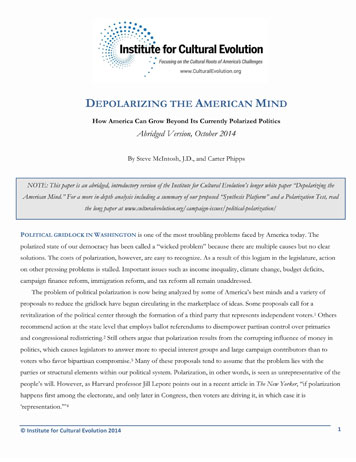 “I think Depolarizing the American Mind by McIntosh and Phipps is among the most insightful essays I’ve ever read about the causes of our Nation’s hyper-partisan polarization problem. It offers a new diagnosis of how we got here, and a new prescription for what to do now. McIntosh and Phipps show us how we can evolve into more constructive forms of disagreement a decade from now.”

– Jonathan Haidt, NYU social psychologist and author of The Righteous Mind: Why Good People Are Divided by Politics and Religion