The Institute for Cultural Evolution is raising funds to help free America from the paralysis of political polarization.

The page below mirrors our Indiegogo Campaign page, click here to go to the actual Indiegogo page.

The Institute for Cultural Evolution (“ICE”) is focusing on the problem of political polarization in America, and we have a plan to help depolarize the American electorate through cultural evolution.

Here’s the problem: political gridlock in Washington is preventing meaningful action on pressing issues we care deeply about. Issues such as climate change, the vanishing middle class, Federal deficits, outdated tax policy, and many others.

While many have lost hope, concluding that our government is controlled by moneyed interests with no progress possible, we’re not ready to give up on America’s democracy. But we do recognize how polarization is exacerbated by the fact that most political issues have now become identity issues wherein the merits of policy are trumped by “tribal” loyalties.

Notwithstanding these challenges, we have a realistic solution that involves fostering political evolution for both the near term, and for the 2016 election and beyond. ICE is now engaged in a campaign to evolve American public opinion on both the Left and the Right by bringing forward a vision of more evolved versions of both sides of the spectrum, and we’re asking for your help.

What we want to do

The money we raise on Indiegogo will help us organize, promote, and sustain our efforts to Depolarize the American mind. Our strategy starts with the recognition that the liberal/conservative polarity is an indelible feature of our body politic, which continues to reappear in new form as society evolves. So we are fostering further evolution by advancing a vision of the “Future Right” and the “Future Left.” These more evolved political positions will better integrate the wisdom of their opponents, while continuing to stand for the core values that animate each side. By showing how each side actually needs the other for its own mature expression, we can help create a political climate in America where new agreements will become possible.

Our website features a detailed whitepaper and video presentation on our strategy, as well as a polarization test that shows how you can become part of the solution. (Click on the image below to go to the live test page.) 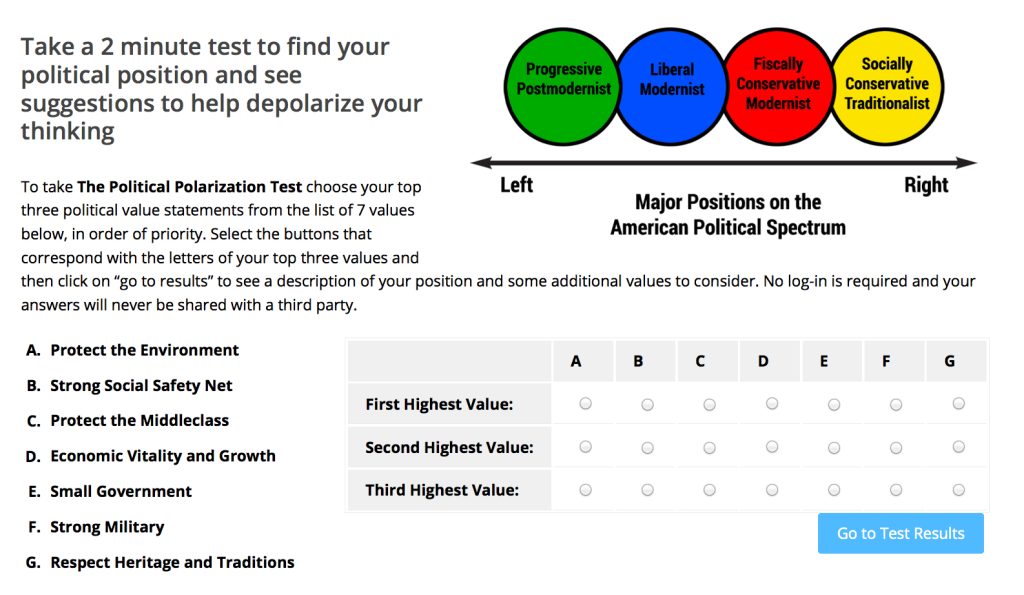 We’re also co-creating conferences and events, such as the recent Conclave on Polarization at the Esalen Center for Theory and Research in California. Beyond this, we’re also inviting you to participate in a series of free virtual caucus calls, which will help define and develop these Future Left and Future Right positions. These teleconference caucus calls, hosted by ICE’s principals, will feature a panel of thought leaders who will discuss the issues and explore ways to evolve thinking on both the Left and Right. The caucus calls will also provide a forum for a large audience of call participants who can voice their opinions and help create more effective expressions of both progressive and conservative political positions. (The image below links to the caucus calls page.)

What will funds be used for?

Our initial funding goal is $25,000. We estimate this amount will pay for:

All contributions are tax deductible

What is the Institute for Cultural Evolution?

ICE is a Colorado-based 501c3 nonproﬁt  think tank that focuses on the cultural roots of America’s challenges. We are a group of “evolutionary” authors and activists who are working to evolve America’s political conversation. Through groundbreaking research, high-level conferences, and grass roots activism, we are helping create  forward movement in our national political landscape. ICE’s current focus is political polarization as described in our acclaimed white paper: Depolarizing the American Mind: How America Can Grow Beyond Its Currently Polarized Politics.

ICE works and partners with other great organizations to achieve our goals, including Esalen Institute’s Center for Theory and Research, Conscious Capitalism, and others. Our Officers and Board of Directors can be seen here.

What’s in it for you?

Your contribution will help us influence public opinion by making this appealing vision of political progress visible in the marketplace of ideas. This is an opportunity to help put “evolutionary/integral politics” on the cultural map. By funding our caucus call project and supporting our larger political polarization campaign you will become “part of the solution.” All contributors will be personally thanked on our website (unless you ask us not to), and contributors will also receive the perks listed on the right.

How else can you participate?

Beyond contributing to our crowdfunding campaign, we invite you to participate in one or more of our planned caucus calls. We also invite you to take our on-line “polarization test” and read our campaign whitepaper: Depolarizing the American Mind. Further, we invite you to leave a comment on our website or facebook page, and otherwise spread the word …

Copyright © 2021 The Institute for Cultural Evolution | Website provided by AMSTEC